Political, personal and insightful are the 3 words that come to my mind after reading Former Secretary of States Madeleine Albright Memoir. The story of how a Czechoslovakian immigrant became the 64th and first women Secretary of States in the United States of America. 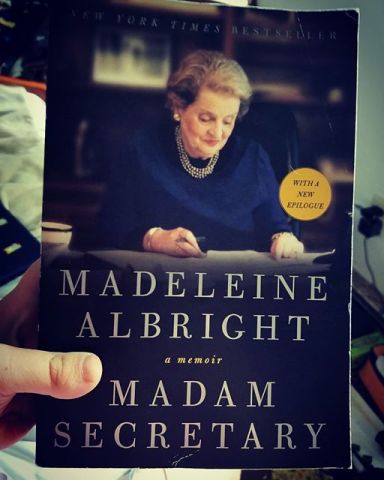 Madeleine Albright was a young, intelligent women full of ambition, when Hitler invaded Czechoslovakia and her family fled to the United States for a safer and better life 1947. After attending Wellesley College,  Madeleine started her professional career in journalism by working at local newspapers. Her political career kicked off when she worked on The National Security Committee under the Former President Jimmy Carter Administration. She went on to work on several different campaigns such as: Michael Dukakis presidential campaign. Madeleine is most known for being The United States Ambassador to the United Nations and the 64th and first women Secretary of State both under Former President Bill Clinton.

This book covers several prominent events in not just The United States but around the world, particularly during her years as Ambassador and Secretary of State. Madeleine highlights several aspects of her personal life as well. Including her marriage, divorce, becoming a parent to her three daughters Anne, Alice and Katie and finding out about her family’s Jewish heritage. She points out the difficult parts of being a parent and juggling a stressful career. However, stressing trying to pave a pathway for females in Government.

Quote: “I had arrived in that harbor half a century before, an eleven-year old immigrant from Prague staring up at the Statue of Liberty. How astonishing that that girl was about to become the 64th Secretary of State and the highest-ranking women in U.S. History.”

This quote describes in a handful sentences how she hopes that her achievements will inspire young men and women that are in or that are coming into this country to shoot for stars and not let the hurtles get them down. I know that women like Madeleine Albright, Hilary Clinton, Michelle Obama, and several more female roles models in Government have inspired me to shoot for my dreams in making not just The United States but the world a better and safer place for all.

View all posts by hadleybooks